How does the green-euro work? 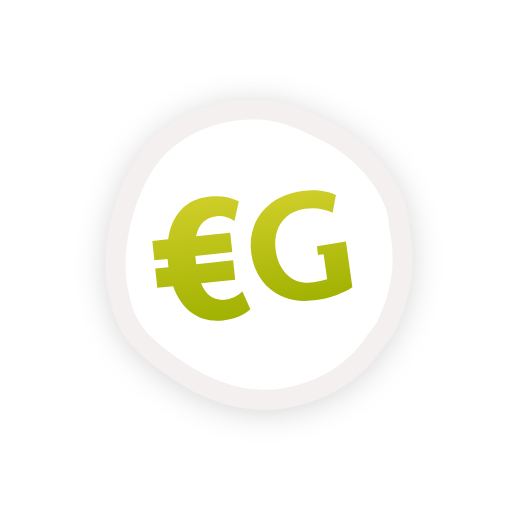 In order to promote, monitor and identify trade in a carbon-free economy, green-euros (€G) are only issued when CO2 emission reductions take place.

So, no CO2 emission reductions, no green-euros.

One green-euro is worth one Euro. There is no exchange rate or speculation possible.

In order to function, green-euros (€G - or euro-green) are issued according to two rules:

Rule 1. A main issue of Euro-Greens against loans as for Euro-Classics

The issuance of Euro-Greens (€G) follows the same rule that applies to scriptural Euros, i.e. they are created against a debt. As the issuance of €Gs is, by design, linked to CO2 reductions. The €G can only be issued if the €G debt finances equipment that reduces CO2 emissions.

An economic agent who borrows €10k to replace an oil boiler with a non-CO2 emitting appliance (heat pump, biomass boiler) will generate the emission of €G10k.

To accelerate the use and creation of €G, Compte CO2 proposes to experiment with an increase in the emission of green-euros that will reward and encourage economic agents, with the following additional Rule 2:

Rule 2. A secondary Euro-Green emission in return for GHG reduction

In Europe, when an economic agent (household, company, local authority, association, etc.) reduces its CO2 emissions by one tonne, it creates a quantity of €G set by the level of the carbon tax of its Member State.

To guarantee the climatic efficacy of the €G, it is proposed to limit the scope of the €G emissions to the heating of buildings and land transport (about 50% of European emissions), according to a methodology developed by Compte CO2 and approved by the UNFCCC and the French government.

According to the methodology, the measurement of the CO2 emission reduction is carried out every year, based on the documents establishing the energy consumption of the household or company. This ex-post measurement guarantees the efficacy of the scheme.

In addition, the €G generated by this Rule 2, contribute to the reimbursement of the interest on the loans taken out under Rule 1. Thus it is possible to have interest rates close to zero %.

The more numerous we are, i.e. the larger the community using Euro-Greens, the greater the social pressure on private and public actors.

Governments (local, national, European) and central banks will have even more incentive to implement Euro-Greens on a large scale, corresponding to the underlying CO2 reductions.

Euro-green can thus contribute massively to the systemic transformation of the economy towards a low-carbon mode.

About currency, "where does the money come from"?

For example, when Mrs Dubois borrows €10k from HSBC, she sees a credit of €10k on her HSBC account. When she buys a car with this/these 10 k€, she transfers it to the account of the seller of the car. If the seller's account is at ING, the €10k goes from HSBC to ING. The €10k thus circulates in the economy, moving from one commercial bank to another.

Mrs Dubois' debt to HSBC (materialised by a contract between Mrs Dubois and HSBC) therefore generates 10k of "new" euros that flow into the economy. Monetary and Financial Codes specifie all the rules that authorise banks to make these entries. In our example, this allows HSBC to issue €10k HSBC on the basis of a contract with Mrs Dubois. These 10k€ HSBC, once transferred to the ING account of the seller of the car become 10k€ INGe. All this is possible because HSBC and ING follow the rules implemented by the European Central Bank Eurosystem.

In simple terms, these rules only allow a bank to lend if it owns at least 10.5% of the money it lends (Basel III ratio). For each loan, the commercial bank therefore recycles 10.5% of pre-existing euros and makes (also called issues) 89.5% of new euros.

This rule does not change in the case of the issuance of green-euros in connection with a loan to reduce CO2 emissions.

Who is funding the Euro-Greens?

With regard to Rule 2, which is specific to green-euros, and which provides a framework for the creation of a quantity of €G equivalent to the carbon tax price of a ton of CO2 each time a tonne of CO2 is cut, these new €G come from several sources:

Initially, to start the scheme, from companies or institutions that voluntarily offset their CO2 emissions (the reduction being verified and proven).

Thus, by offsetting their emissions with Compte CO2, these companies allow for the start of the green-euro. Congratulations to them for this remarkable effort!

The second step could be a public subsidy. This would replace some existing schemes to improve their climate efficacy.

Indeed, all current subsidies are calculated "ex-ante", i.e. estimating in advance the climatic gain of the subsidy. For the record, in January 2014, the First President of the Court of Auditors denounced the fact that: "the impact of the various public schemes on the reduction of greenhouse gas emissions is not always evaluated". And it added, despite the size of the 19.8 billion euros spent on aids that are "abundant, insufficiently evaluated and lacking the necessary consistency". By replacing these "ex-ante" aids with "ex-post" aids, the Euro-Green being created only a posteriori from real CO2 emission reduction measures - no CO2 emission reductions, no Euro-Green - the State could thus reduce its public spending while improving the climate efficacy of its action.

It should be noted that on 14 October 2021, the Paris Administrative Court ordered the French State to repair the consequences of its failure to combat climate change. The Euro-Green therefore deserve a full place in the arsenal of economic tools available to the State.

In a third phase, green-euros could become a Central Bank Digital Currency. In particular in the framework of the implementation of the European Green Deal (EGD):